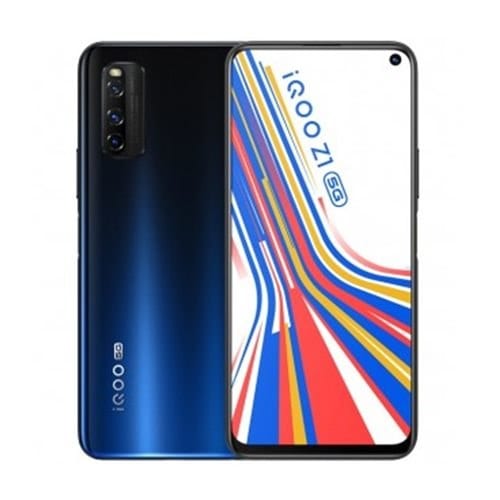 Vivo subbrand iQOO has officially announced an upper mid-range smartphone which is Vivo iQOO Z1. This new device will be joining the iQOO series. Recall that in February, iQOO introduced the iQOO 3 5G that packs a powerful Snapdragon 865 chipset.

The Vivo iQOO Z1 packs a nice and attractive body that features a smooth panel. The panel is housing the camera, an LED flash, and also the logo. It measures 164 x 75.6 x 8.9 mm and weight 195 grams. The smartphone is also available in amazing colors shades.

On the front, the iQOO Z1 has a 6.57-inch IPS LCD screen with a punch-hole hosting the front camera. It has an HDR10 compliant display that supports DCI-P3 color gamut and produces a full HD+ resolution of 1080 x 2400 pixels with a refresh rate of up to 144Hz.

On the camera, the Vivo iQOO Z1 has a 16 MP front shooter. The back consists of a triple camera system that features a 48-megapixel main lens, a 112-degree 8-megapixel ultrawide sensor, and a 2-megapixel macro shooter paired with 4cm focal length.

The Octa-core taking charge of the system comprises of four Cortex-A77 CPU cores and four Cortex-A55 cores along with Mali-G77 MP for graphics. The iQOO Z1 boots with iQOO UI 1.0 flavored Android 10 operating system out of the box.

The maker claims that more than 100,000 apps are optimized to work with a 144Hz display. Many games have also been optimized to support the highest refresh rate phone.

For better gaming experience, the device provides users with five customized sound effects. On paper, the Vivo iQOO Z1 has an internal storage of 8GB RAM with up to 256GB.

The smartphone has a 4,500mAh battery that carries support for 44W fast charging. It has a 5G connectivity on both dual SIM slots.

Other connectivity options on the Vivo iQOO Z1 include Fi 6, NFC, GPS, USB-C, and 3.5mm audio jack. The phone can even connect to Wi-Fi 6 and 5G networks simultaneously.

For better entertainment, it packs dual stereo speakers and a Smart PA amplifier. There is also a side-mounted fingerprint scanner for security. Lastly, it comes with a super liquid-cooled heat dissipation system that can reduce the internal temperature by up to 10 degrees celsius.

You can order the phone in Space Blue, Galaxy Silver, and Symphony Meteor colors. The company will also be selling the protective case and game controller to buyers at a price of $7 and $28 respectively.

Here are a few specs of the Vivo iQOO Z1:

getting Bitcoin loans without Collateral

The hidden toll of lockdown on rainforests