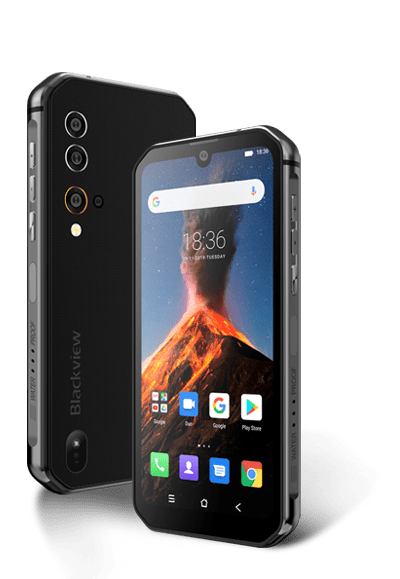 If you are searching for a very attractive smartphone, the BlackView BV9900 is certainly not for you. It takes off from where it’s predecessor stopped. It continues the rugged build and design its predecessors had.

The Blackview 9900 was built for enthusiasts who desire a performance beast of a smartphone, without having to bother about having to consciously protect it from falling. It is the type of smartphone you probably use without a case.

The BlackView BV9900 features a mixture of metal and plastic in it’s build. It presents itself as a smartphone you can use in any terrain without fear. Manufacturer claim it can withstand temperature as low as -30 degrees Celcius.

The BlackView BV9900 has an IP68 rating for dust and water resistance. This means accidental drops in water won’t destroy your smartphone, it’s manufacturers claim it can withstand falls from up to 1.5m in height.

The front is home to 5.84 inches full HD display, with a screen resolution of 1080 x 2340. This display is protected by Corning Gorilla Glass 5.

This display is a drop notch display. Inside the notch, you will find a front-facing camera. Above the camera, is its mouthpiece.

The rear of the BlackView BV9900 is home to 4 cameras, a camera flash, and Ultraviolet sensor, a heart rate sensor and the Black View Logo. Please note that the android phone has a side-mounted fingerprint sensor.

The camera department on the BlackView BV9900 is pretty impressive. Though the cameras here cannot be compared to that of the top players in the camera game like the iPhone 11 Pro and the Google Pixel 4.  the cameras here are certainly worth discussing, as they feature sensors that have become useful over the years.

On the rear, the BlackView BV9900 features a quad-camera system that houses a 48MP primary camera with an aperture of f/1.79, a 16MP ultra-wide camera with 120 degrees of view, a 5MP depth camera and a 2MP macro camera.

For selfies, the smartphone makes use of a 16MP wide front-facing camera.

Aside from being a rugged smartphone, the Blackview BV9900 packs in specs that are certainly going to crush a lot of smartphone tasks, hardware specs on this device can be best described as a higher mid-range.

It features an Octa-core MediaTek helio P90 processor, clocked at 2.2Ghz. Powering graphics on this smartphone is a PowerVR GM9446 graphics processing unit.

The BlackView 9900 features 8GB of RAM, 256GB of UFS 2.1 storage, with options for Micro-SD expansion. This smartphone also packs in a 4380mAh battery. It supports 18W fast charging via USB and 10W fast wireless charging.

On the software side, the Blackview BV9900 runs its user interface, on top of the Android 9.0 operating system.

The Blackview BV9900 features a 3.5mm headphone jack and a USB Type C port. Other connectivity options include dual-band Wi-Fi, Bluetooth 5.0, and NFC.

Internet connectivity on the Blackview BV9900 is capped at 4G LTE. It has support for all the Global bands. Users in Nigeria would be able to use 4G network for major provides like MTN, GLO, Airtel, and 9Mobile.

Here are a few specs of the Blackview BV9900:

2 parts of programming a game

How to Improve iPhone Battery Performance?

How to Start a Blog and Make Money Online