Blackview BV5500 is a fashionable rugged smartphone from the Chinese company. We have known Blackview to be one of the fastest-growing rugged outdoor smartphone global brands.

The BV series has a strong history in flagship and battery. The good news about this new edition is that it deviated from the rugged design in a fashionable way that will raise many eyeballs. 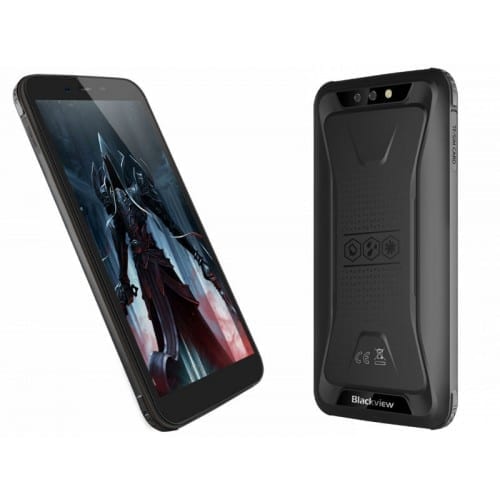 When it comes to aesthetics, the Blackview BV5500 will win some hearts with the sleek and aesthetic surface texture. Apart from that, this also an entry-level smartphone and it will be a breath of fresh air.

The difference between this phone and other rugged phones like the BV9000, BV8000, BV7000, many more is the Xiaomi’s Black Shark unique back cover touch design. Looking beautiful, the phone also has a unique toughness which will be one of its top-selling points.

The thinner designed frame makes its grip more comfortable and easier to hold. The Blackview BV5500 also has both dust and water-resistant. It measures 75.5 mm x 152.19 mm in dimensions and weighs 225 grams.

Overall, we can say the phone is very small and it will be loved by everyone, not just outdoor workers. The aluminum frame is curved at the edges making the device feel great to hold. The display screen is compact offering 5.5″ 18:9 HD+ IPS display.

It will also be nice to point out that the camera set-up on the phone is not that good though. However, considering the price, it’s still better than none. The main camera consists of a combo shooter of 8 Megapixels + 0.3 Megapixels.

The camera is paired with an LED flash, while the front camera is 5 Megapixels with F2.8 Aperture.

The Blackview BV5500 has a Mediatek MT6580P chipset that comes with a Quad-core processor clocking at a speed of 1.3GHz. It has ARM Mali-400 MP2 for graphics and gaming.

It’s also good to note that the phone modern SoC enables smooth UI transitions and favorites multitasking. The Google Android 8.0 Oreo powering the phone will reduce the waste of hardware and software resources, resulting in a smooth performance as it intelligently controls CPU cores based on the users’ habits.

There is also Face ID on the phone making the device more secure and easier to unlock even when wearing gloves. The inbuilt storage is 16GB paired with 2GB RAM which is also expandable via micro SD.

It will sell for 500 Ghs in Ghana and 9,500 Ksh in Kenya. You can order the phone in amazing colors namely Black, Green, and Yellow.

Here are a few specs of the Blackview BV5500:

How To take Good Shots With Your Bad Phone Camera

Most Dangerous Railway tracks in the World